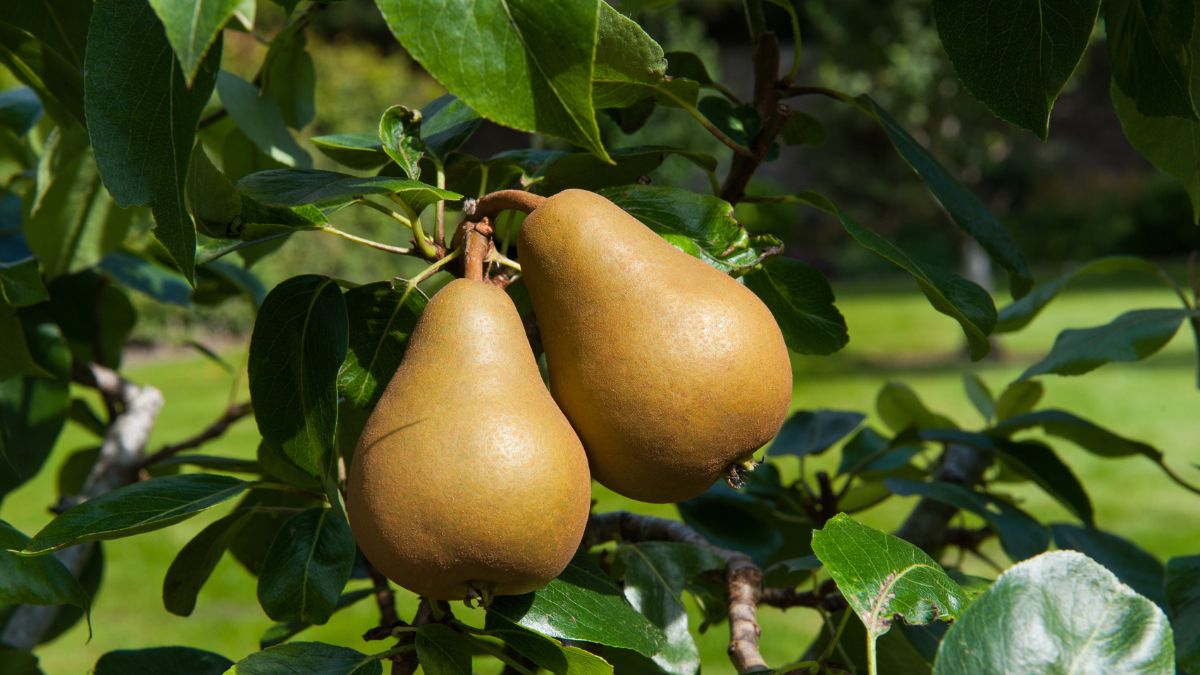 Last Updated on November 16, 2022 by Guillermina

If you want to learn How to Grow an Asian Pear tree, then we have some great tips and strategies that will garner favorable results. This pear tree species is indigenous to China and Japan. The Japanese have been cultivating and improving crunchier forms of this delicious fruit. Today, there are a large variety of cultivars grown on American soil.

Although California continues to be the greatest commercial producer of Asian pears in North America, the fruit tree may be cultivated in many other places provided the necessary nutritional and care demands are met. Because these plants belong to the same family as apples they are occasionally referred to as apple pears because of their appearance.

Late February to mid-April is when you will be able to see the fragrant flowers of this plant. Asian pears ripen on the tree, unlike their European counterparts, and are best consumed when firm and crispy. Learn more about growing the different cultivars in the information provided below.

Where Do Asian Pears Grow Best?

To have successful results, it is vital to know how to grow an Asian pear tree. The Japanese fruit variety has a spherical shape and delicious, juicy flesh. It usually turns a rusty brown color when it is fully mature. There are also hybrid varieties of this fruit that resemble European pears in shape and are more resistant to cold temperatures.

These kinds have been characterized as having a juicy flavor with a touch of acidity and sweetness, and their hues range from yellow to brown. They are amongst the preferred fruit trees to plant and cultivate in Philadelphia since they are tasty, productive, and generally less susceptible to pests and diseases than the majority of others. 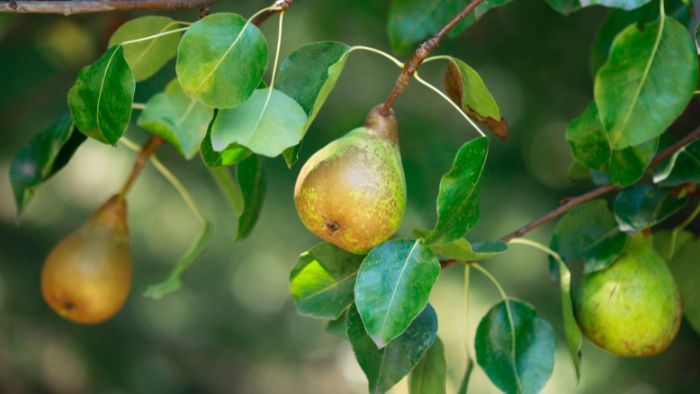 They are hardy in USDA zones 5 to 9 and flourish in these regions. It takes neutral to slightly acidic pH soil with good drainage to grow Asian pear trees. This should be ideally at a 6.3 to 6.8 level for great results. Also, planting them in an area that receives at least 8 hours of direct sunlight for zones 5-7 or afternoon shade for zones 8–9 is ideal.

This is because enough sunlight activates the initiation of new flower buds for the following season, and more sunlight may result in increased carbohydrate production, which may enhance flavor development. To ensure maximum ventilation and productivity, it is advised to space Asian pear trees at least 15 feet apart.

How do you Grow an Asian Pear Tree from a Cutting?

Grafting scions or a plant’s young shoots or twigs to rootstocks is the method used to reproduce Asian pear cultivars. This should be done using the base and root portion of the plant. The appropriate rootstock must be chosen since it will affect your variety’s unique characteristics, including winter hardiness, longevity, fruit yield, size, and most critically, pest and disease resistance.

Here Are A Few Tips On How To Grow An Asian Pear Tree:

1. The Pyrus betulifolia and Pyrus calleryana are the two best rootstocks for Asian pears because both species have roots that are fairly cold-hardy, have fireblight-resistant systems, and are tolerant of wet or dry soils. 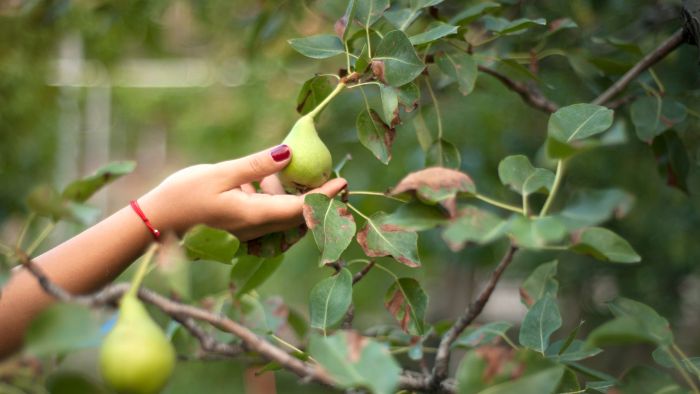 2. Ensure that you remove rocks, grass, weeds, and soil clumps from the planting area about a week before you want to plant.

3. Planting many trees requires at least a 15-foot separation between each one.

4. Put the cuttings in a container of water and let them soak for about an hour before planting.

5. To ensure that the roots can fit and spread out freely in the earth, dig a hole that is twice as deep and wide as the expected root ball.

6. Thereafter, add about four inches of compost to the soil and stir it in.

7. The cutting should be positioned in the center of the hole when planting.

8. After placing two-thirds of the soil in the backfill, lightly compact the earth.

9. Soak the ground with water prior to adding the final third of the soil for backfilling.

10. Install a stake that is 10 feet tall, two feet deep, and four inches away from the trunk. To ensure that the tree grows straight, tie it to the stake.

Here’s a video that shows you how to grow the best backyard fruit trees.

With a few exceptions, Asian pears are not self-fertile trees and must cross-pollinate with other kinds in order to yield their best fruit. The flowers contain ten ovules and five stigmas. The fruit may be malformed if only a small portion of these ovules are pollinated. This is why it is essential to learn the ins and outs of how to grow an Asian pear tree.

The most significant pollinators of pears are honey bees, however, they are not particularly attracted to the blooms. Because of the low sugar concentration, bees are not attracted to them very much. Because of this, honey bee pollination of pears might be challenging. That is why Asian pears typically require cross-pollination between two different cultivars in order for fruit to grow.

The Shinseiki and Nijiseiki cultivars are listed in some sources as partially self-fertile trees which is beneficial for people who only have room to grow one. The best alternative would be to graft different cultivars onto the same tree.

How Many Years Does it Take a Pear Tree to Bear Fruit?

For pear trees to bear the best fruit, full sun is necessary. To keep the tree healthy, productive, and attractive, it is essential to prune it annually. The time it takes for trees to start flowering and bearing fruit ranges from 3 to 10 years. Depending on the species and location, Asian pears are ready to pick as soon as they are ripe on the tree. In Philadelphia, this is typically between late August and early September. 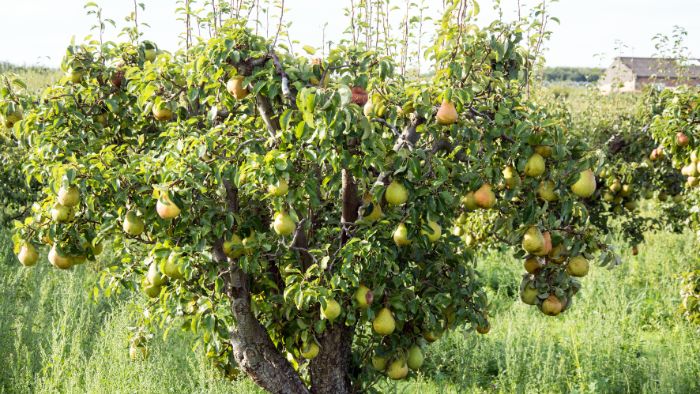 The fruit that is ripe will turn from green to greenish-yellow and from green to light brown or orange on cultivars with russeted skin. To be certain, you should first examine a sample before harvesting them! Pears can be stored for about a week or two at room temperature and for around three months in cold storage.

Now That You Know How To Grow An Asian Pear Tree, Here Are A Few Tips To Yield Delicious Fruit When Harvesting:

Soil – These plants like soil that is neutral or slightly acidic. The pear tree can grow successfully on typical soil with a pH close to 7, as long as it is well-drained and devoid of standing water. However, fertile loamy, or sandy soils are known to produce the highest yields.
Water – Watering is frequently based on humidity, soil type, and how much light a tree receives. Therefore, in most regions, watering is advised once a week until dormancy for the duration of the year, and twice a week for the first month, as with most newly planted trees. In certain climates, additional water is only required after the first year during protracted droughts.
Sunlight – This tree is quite hardy and grows best in direct sunlight with at least eight hours of exposure daily.
Pruning – Young Asian pear trees require annual winter trimming. When doing this, ensure that you get rid of any upright, robust growth. By using branch spreaders or other devices, train the major scaffold branches to have more horizontal angles. To promote more fruitful development, branches may be pruned shorter with heading cuts.
Diseases and pests – Asian pears trees are less susceptible to pest and disease problems and are known to produce fruit that is equally juicy, crunchy, and sweet. A bacterial disease called fire blight may affect Asian pears. A black discoloration in the bark indicates the presence of an infection, which can spread if left untreated. 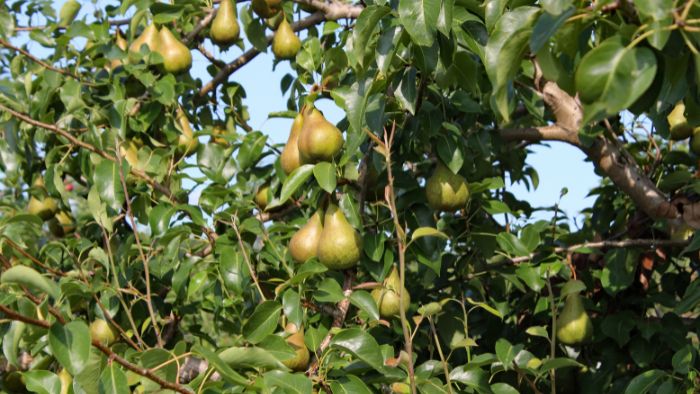 You cannot determine the ripeness of pears by looking at the skin because they ripen from the inside out. Apply light pressure close to the stem end of the Asian pear to determine if it is ready for harvesting. It is most likely ready to be eaten if it’s slightly soft.

Dark rot is a fungal disease that affects ornamental trees, apples, pears, plums, cherries, and other fruit. The same fungi that cause blossom wilt of flowers and fruit spurs are responsible for this disease. Therefore, Asian pear tree care is essential in aiding them to thrive. You can anticipate fruits in your garden in the fall because pears are normally accessible from August through October.

They generally require less care than apples and can also be grown from seed. However, keep in mind that the trees grown from seed may yield fruit that will be different from and possibly inferior to the ones the seeds originally came from. Follow our tips about how to grow an Asian pear tree for favorable results. Here’s a link with more information about growing pears in your home garden.